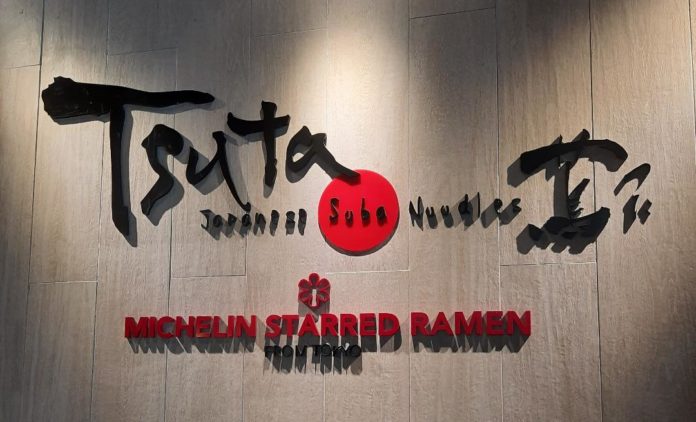 Master Chef Yuki Onishi first opened Tsuta Japanese Soba Noodles in Sugamo, Tokyo in January 2012.   Driven by his fervent desire to redefine ramen while staying true to his culinary philosophy of using premium, natural ingredients without any artificial flavour enhancers or MSG, Chef Yuki carefully selects the ingredients that constitute his signature Dashi or soup broth, oils, & sauces and controls the elements that make up the taste and quality of the noodles.  As a result, you get a ramen dish that melds the firm texture & subtle flavours of his soba noodles with a delicate, multi-layered umami flavour burst.

In recognition of his dedication to his culinary craft that drew long lines of customers to his restaurant daily, Tsuta was granted One Michelin Star in 2015 ahead of any other ramen restaurant in the world.  This distinction still fills Chef Yuki with pride as he earned his star because of his signature Shoyu Soba, which featured his signature full bodied & delicate dashi and a special blend of his custom brewed shoyu finished off with a piquant black truffle sauce for a multi-layered flavour experience. 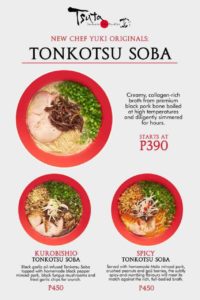 Coming from a family of Ramen Chefs, Chef Yuki grew up around food.  During his foreign travels, he discovered a shocking contrast between Japanese & foreign food culture where foreign dishes were often paired with sauces while in Japan, there was a strong culture of using dashi (soup stock) and a strong focus on umami.  Inspired by this realization, he sought to develop ramen dishes that stayed true to his culinary philosophy of using premium, all natural ingredients while experimenting with different sauce pairings with the vision of having his unique ramen creations embraced around the world.

In this sense, Chef Yuki’s vision has come to its full fruition with the launching of his All NEW Tonkotsu Soba Bowls where he has masterfully enhanced the richness of the broth while still preserving the essence of his signature Dashi.

This creamy white collagen-rich broth consists of premium black pork bone and trotter boiled at a high temperature then diligently simmered for hours to extract the richest flavours possible. Hokkaido sea kelp and shiitake mushrooms are added to the broth towards the end to enrich the taste with natural umami flavours. Just before serving, a special Shoyu seasoning sauce is added to amplify the fragrant, savoury and full-bodied broth.

‘Ma You’ (burnt garlic oil) – a classic tonkotsu flavour in Japan – is painstakingly made from scratch using a combination of aromatics including black pepper for its woody flavour and fragrant burnt garlic. The noodles are topped with homemade black pepper minced pork, black fungus mushrooms and fried garlic chips for crunch. A drizzle of the piquant black Ma You gives the rich tonkotsu broth a unique garlicky and intensely earthy flavour.