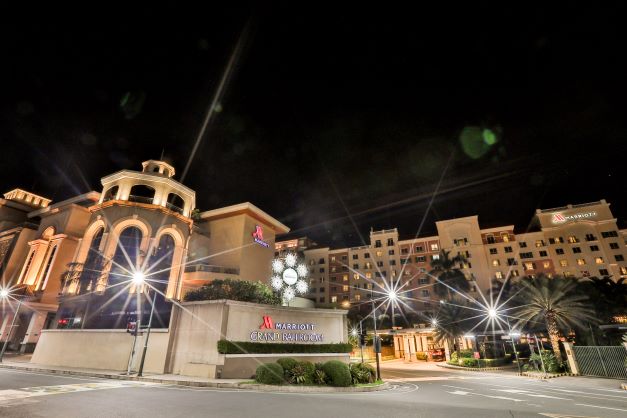 After two years of hiatus, Marriott Philippines kicked off the holidays with a market-wide tree and lantern lighting activity dubbed as “PASKONSTELASYON”: The Marriott Bonvoy Constellation of Holiday Celebrations.

The unique term is a portmanteau of two meaningful words: “Pasko” or Christmas, and “Konstelasyon” or Constellation which means a group of stars forming a recognizable pattern. This also symbolizes the growing presence of Marriott properties in the country and how it is interconnected with the same heart for the festive season, strengthened by its unifying travel program, Marriott Bonvoy.

The week started with a heartwarming tree lighting ceremony at the City of Love. Guests were serenaded by the calming voices of the Kinaadman Chorale while treated to a sumptuous feast at the Al Fresco area. A special modern contemporary performance was also presented by the team of Novy Bereber under Sayaw PD, Dance for Parkinson’s nonprofit organization. Courtyard Iloilo also lighted the first star in the constellation which is “The Vacation Star” that symbolizes a well-balanced business, rest, and recreation time perfect for the holiday season.

Inspired by local indigenous materials Abaca and Anahaw, Sheraton Manila Hotel’s décor embellished with gold and green trinkets symbolizes life and abundance created the festive atmosphere. Together with the hotel’s General Manager Anna Vergara, the ceremony was graced by the presence of Honorable Pasay City Mayor Imelda “Emi” Calixto-Rubiano, together with Newport World Resorts’ President and CEO Kingson Sian, and the rest of the senior leaders of Sheraton Manila Hotel.

Right after the lighting of the tree and “The Soiree Star”, guests were enthralled to the unique rendition of Marriott’s official holiday theme “Moments with You” performed by the theater artists Gab Pangilinan and Myke Salomon, with Philippine Musical Theater veteran, Ms. Menchu Lauchengco-Yulo, and stalwart of Philippine theater, Mr. Michael Williams, with award-winning saxophonist Josh Espinosa.

Guests trooped to S Kitchen to continue the night over delicious food prepared by the team of Executive Chef Kiko Santiago and to a one-of-a-kind SOIREE: THE MUSICAL GATHERING. Everyone was serenaded by the featured thespians with close to the heart songs together with well-known pianist and musical director, Maestro Rony Fortich.

Last but definitely not the least — The Brilliant Star

Ending the week of festivities was the flagship, Marriott Hotel Manila. The day commenced with the ribbon-cutting ceremony of the “PASKONSTELASYON”: The Art of Giving Exhibit, organized by Rotary Club Passport One Marikina, followed by the “PASKONSTELASYON”: The Golden Santa Story, Storytelling and Gingerbread Making Activity with the kids and beneficiaries from Save the Children Philippines and Pasay Social Welfare and Development Department.

Later that night was the ceremonial lighting of the tree and the Marriott Bonvoy “Brilliant Star” led by Multi-property Vice President in the Philippines of Marriott International Bruce Winton, together with Ms. Universe 2011 3rd Runner Up, and now Ms. Universe Philippines Chariman Shamcey Supsup-Lee, and husband entrepreneur Lloyd Lee with their children, and Department of Tourism Regional Director for National Capital Region Sharlene Batin, with the rest of Marriott Manila’s Executive Committee.

Immediately after, Acel Bisa Van Ommen, one of Filipino music’s most resonant voices, together with Malaya Dance Theatre, performed her original composition “Moments with You”, rearranged for the yuletide season by Jeremiah De Leon.

Marriott Manila, Sheraton Manila, and Courtyard Iloilo had prepared yuletide offers that you surely don’t want to miss. Visit @manilamarriott, @sheratonmanila, and @courtyardbymarriottiloilo to know more about these irresistible packages.

In the mood for NOVO-LOVE

A sparkling summer at DIAMOND HOTEL