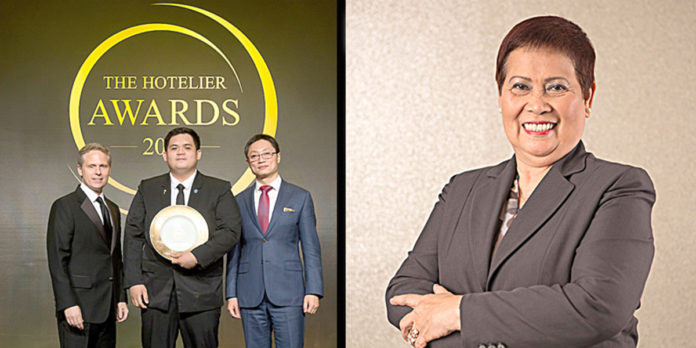 Two personnel of luxury integrated resort City of Dreams Manila bested their peers in the Asian region at the recently concluded 2017 BMW Hotelier Awards in Studio City, Macau. Director of Housekeeping Judith Matubis and Emergency Response Team Supervisor Michael Lumbres were named as Asia’s Rooms Hotelier of the Year and Asia’s Unsung Hero of the Year, respectively. They were among the 24 winners in the two awards categories for Greater China and Asia.

Judith was recognized for her more than four decades of innovative contribution to housekeeping as a vital component of hotel operations. A seasoned hotelier, Judith began her journey in 1972, and has since led the housekeeping team of various 5-star hotels in the Philippines, China, Thailand, Myanmar, and Taiwan. In her current role at City of Dreams Manila, she is often referred to as ‘the mother of Housekeeping’ for her maternal care and mentorship of the team members.

Ensuring guests’ safety and security on property is a prime most concern of hotels and integrated resorts operating twenty-four hours a day. A supervisor at City of Dreams Manila’s Emergency Response and Preparedness unit of the Security Department, and one of the pioneer First Aid & Safety Officers, Michael helps safeguards guests’ welfare. He also went the extra mile and volunteered as a member of City Of Dreams Manila’s Firefighting team. With his active participation, the resort’s firefighting team won the 9th National Hotel Fire Brigade Competition, amongst other awards.

“The recognition for Judith and Michael is a testament to their passion and exceptional diligence to ensure that our guests’ comfort and well-being are given paramount importance.  On behalf of our more than 5,600 team members, we are truly proud of them both. As pioneers in their respective fields in housekeeping and emergency response at City of Dreams, they have set a new standard for others to emulate,” City of Dreams Manila Property President Geoff Andres stated, underscoring their valuable contributions in integrated resort operations and in the promotion of tourism in the country and in the region.

The 2017 BMW Hotelier Awards had more than 500 applications from over 70 different brands across 14 different countries vying for the Asia and Greater China categories. Winners of each category were decided by the expert judging panel through a two-round process and based on a combination of facts presented in the applications, interviews, and testimonials.

The award winners were presented with their prestigious trophies by one of the six judges alongside a representative from the partnering companies. This year’s partners included BMW, Nespresso for the third year running, Lucaris, Pernod Ricard, Sutherland, Bernardaud and Cathay Pacific & Cathay Dragon.

EDSA SHANGRI-LA, Manila brings in the heartfelt joy of Christmas

December 3, 2021
Love them or loathe them, you must admit that oysters provide a memorable eating experience and a potent hit of shellfish tastiness. Last November 26,...

Have an extraordinary Valentine escapade at Sisterfields Tagaytay